The researcher from the Sound Perception and Design Team and composer Andrea Cera, associated with the project, recently received a nomination from the Audio Branding Academy for the conception and production of the sound design for the Renault Symbioz. 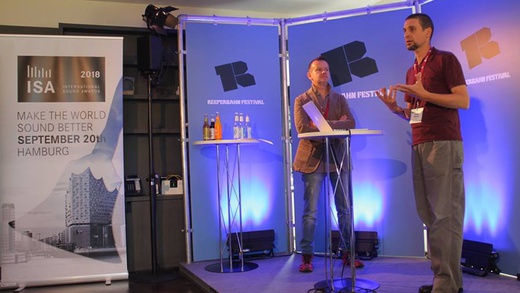 A new electric autonomous demo car, the Renault Symbioz represents Renault’s vision of the automobile for 2030. The car was unveiled at the Frankfort Motor Show in 2017 and journalists had the chance to test it. To curate the sonic aspects of this project, in 2016 an industrial collaboration was initiated between Renault’s Design/Innovation Lab departments, and IRCAM’s Sound Perception and Design Team, represented by engineer-researcher Nicolas Misdariis, and sound designer Andrea Cera. The Renault Symbioz sound design project offered two challenges: the design of an external sound to warn pedestrians of the vehicle’s presence, and the design of a collection of sounds for the car’s interior.

Nicolas Misdariis and Andrea Cera talked to us about the new challenges connected with autonomous driving, just as they received a nomination from the Audio Branding Academy, an international group of professionals, for “Better Sound 2018”.

Nicolas Misdariis, Andrea Cera, this isn’t your first sound design project with Renault. What is unique about the Renault Symbioz project?
Symbioz represents a fusion of vehicle and living space. The care for the passenger’s comfort and peace of mind coexists with the experimentation of new technologies for controlling the car’s behavior, internal atmosphere and feel. The project offered two sound design challenges : the design of an external sound to warn pedestrians of the presence of the car (sound signature), and the design of a collection of sounds for the car’s interior (cockpit sounds).

Can you tell us a little bit more about the new sound signature?
The sound signature is diffused when the car’s speed is between 0 and 30 km/h – a speed range in which the electric car is potentially silent. Its features are derived from two previous projects by the same team, the sound signatures of Renault Trezor (a concept-car) and Renault Zoé (a commercialized model).

The nature of Symbioz’s sound signature is a hybrid of electric and turbine components, with a trace of a powerful but not aggressive internal combustion engine. When the car is idling, it emits sequences of soft, short and high-pitched sounds, creating an abstract language (from the emerging behavior of audio agents), and warning pedestrians that the car is switched on. The sound’s prototype was created in a software environment for prototyping and sound creation—Max—and then converted to a proprietary algorithm.

How did you conceive the cockpit sounds?
Symbioz is a laboratory for studying the future of cockpit sounds. We have developed a series of innovative sonic Human-Machine Interfaces (HMI), in two distinct directions.

The first direction was exhaustiveness. We processed all driver/passenger/cockpit interactions related to Symbioz’s modes of functioning. The availability of a self-driving mode creates new design challenges : how to communicate the levels of autonomy of the car? How to reassure the passengers that everything is OK when the car is self-driving? We worked with a kind of score to ensure the coherence of the sounds before producing them. Then, we created a prototype in Max, translating the score into a collection of sound sketches. Finally, we transformed the sketches into qualitative sounds using sonic materials captured from materials present in the cockpit (work carried out by Janick Deneux, sound design student at ESAD TALM Le Mans). 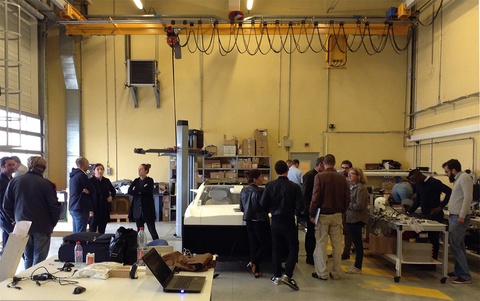 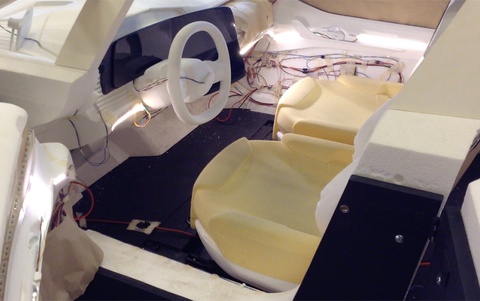 The second direction was spatialization. We developed an original concept of spatial sonic HMI. Every sound played in Symbioz’s cockpit (blinkers, alarms, info sounds…) is placed in a virtual acoustic space. The car has three modes of use (Classic, Dynamic, Autonomous). In each mode the sounds slightly move around virtual positions, with different degrees of jitter and reverberation. For instance, in Dynamic Mode the blinkers are firmly placed in the direction the car will take. In Autonomous Drive Mode the blinkers are oriented much loosely, since no passenger is focused in driving. By moving in space, sonic HMIs become less annoying and more natural – changes in position translate into subtle timbral shifts, due to phasing and reflections in the cockpit walls.