The determination of a unified measure for music has long been a highly debated question, at the center of intense negotiations between countries, and across fields of knowledge. Reflecting the significance of these exchanges, archives and collections across the world hold rich material, dating from the beginning of the nineteenth century, documenting the conversations and practices that ultimately led to the adoption of concert pitch A 440, during an international conference held in London in 1939. These sources have remained largely unexplored and no study has yet explained the creation of this unit. While historians of science have shown the labour and compromised nature of standards by analysing the historical contingencies of their production, A 440 has escaped attention, often appearing as a self-evidently beneficial musical practice. 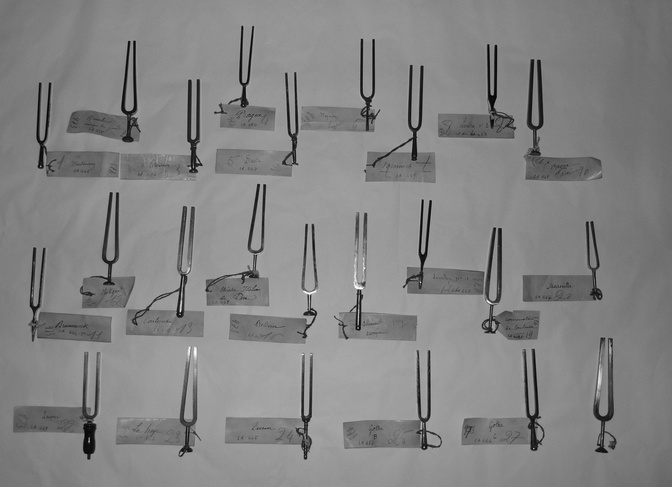 Drawing on intensive archival and material research, Fanny Gribenski aims at uncovering the musical dimension of efforts to order natural phenomena and examines the construction of a sonic point of reference for the Western world. Tuning the World is the working title of the monograph that shall assemble the bulk of her research of several years. Through a combination of music and sound studies, transnational history, and science studies, this book will provide a sonic expansion to previous works on scientific and technical standards, highlighting the fields of expertise and actors involved in fixing A 440, as well as the tools, strategies and policies developed in order to measure, control and regulate sound frequencies.

This research addresses several crucial questions: why did pitch standardization become a topic of preoccupation in the early nineteenth century? Which actors and countries were empowered in the negotiations regarding the definition of A? And what were the procedures governing the making of this standard? By answering them, this project demonstrates the contingencies underlying the historical construction of concert pitch A 440, and chart the social networks aimed at literally tuning the world.